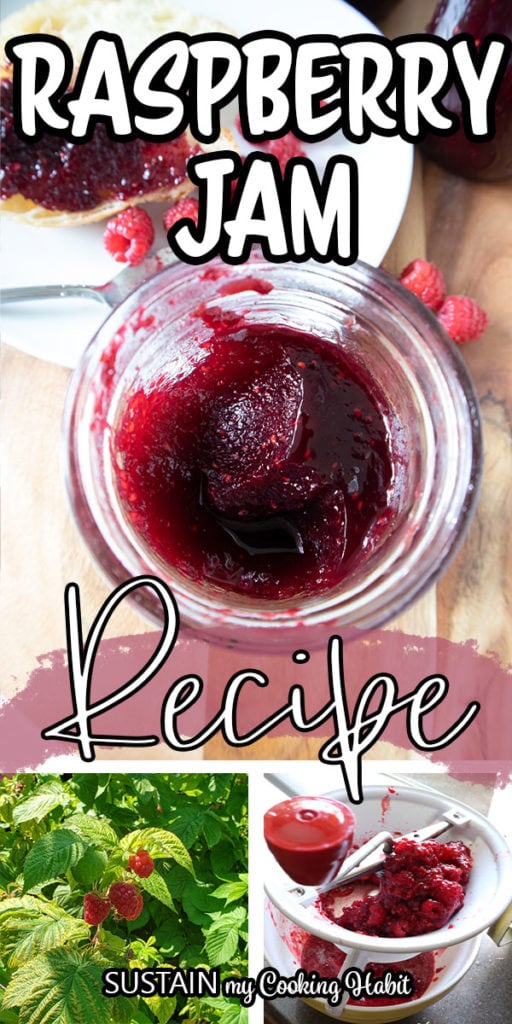 Do you have a favourite jam, as in “fruit preserve” (…not tunes)? For me, its got to be raspberry jam! So I am happily sharing this raspberry jam recipe made with reduced sugar but still deliciously sweet.

With raspberrry plants producing raspberries biannually in South-Western Ontario (once in July and then again in September), we are able to get two good batches of fresh, locally grown berries. So whether we’re picking off the plants in our backyards or heading to a nearby raspberry farm, means we get more delicious raspberry jam, yay!

Tradionally, raspberry jam is made with equal parts raspberry and sugar; which, in my opinion, tends to take away from the natural raspberry flavor. For this recipe, we used half the amount of sugar compared with other raspberry jam recipes.

Disclosure: This post contains affiliate links for your shopping convenience. You can find our full disclosure here.

These proportionas produce three full jars at 8oz each.

How To Make Raspberry Jam

Place raspberries in a strainer and wash by running them under water quickly.

How to Remove Seeds from Raspberries

To reduce the amount of seeds in the raspberry jam, it’s important to remove them before cooking. There are a few different ways to remove seeds from raspberries, here are a few options to consider:

Place washed whole raspberries in a blender to puree. Once pureed, strain the raspberries by passing the puree through a fine sieve using a metal soup ladle to work through the holes.  Alternatively, you can also mash the raspberries directly inside the sieve but this will take some time (and muscle).

A quicker method (and our preferred method) is to use a non-electric food mill. Working a few cups at a time, place raspberries into the mixer and crank the handle to work the raspberry juice through the holes while separating the seeds.

High powered food processor would likely break down the seeds from what we’ve heard but we haven’t tried this method.

In a large pot, place strained raspberries and sugar.

In a small bowl, squeeze one whole lemon and mix together with pectin until well blended. Add this mixture to the pot and stir together.

In the meantime, sterilize the jars.

Sterilizing the Jars and Lids

The goal in sterilizing your jars is to kill any microbes on the inside surfaces of the jars and lids.

Place new or thoroughly cleaned jars (ideally fresh from the dishwasher washed on hot setting) and lids in a large pot filled with water and boil on the stove top for 10 minutes.

Alternatively, arrange the cleaned jars, open side up, in a deep, oven-safe baking dish. Place the dish with the jars into the oven and heat to 210F for 15 minutes. The jars will be sterilized – make sure not to touch the insides of the jars with anything that hasn’t been sterilized.

Just before pouring into the jars, boil the rims, lids, a pair of tongs and ladel on the stove top for 5 minutes. Do not touch any of the inside surfaces with anything that hasn’t been sterilized.

Pour cooked raspberry mixture into hot jars, seal them and place them in the oven at 220F on a baking sheet for 30 minutes for a better seal.

So tell us, which is your favourite jam? 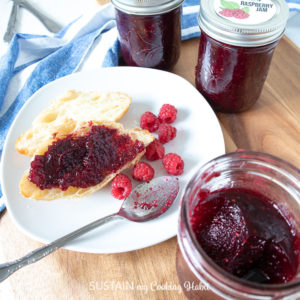 How To Make Raspberry Jam